The Wiseburn Unified School District (Wiseburn) and Da Vinci Schools (Da Vinci) have a unique and collaborative district-charter partnership model that provides a world class education for all of the students and families we mutually serve. To strengthen that collaboration, we wanted to provide you with some background and history of our partnership and clarify who to contact if you have questions or concerns about any of Da Vinci’s schools (Communications, Connect, Design, and Science).

In most situations, questions or concerns can be directed to Da Vinci for resolution. Thank you for your continued support of our schools and community.

World-Class Education, Right Here
When the Wiseburn community was looking to expand into high school, the Wiseburn Board of Trustees asked itself a not-so-simple question: how can we ensure that the education we provide now prepares our students for the jobs of the future?

From this, the Wiseburn + Da Vinci Schools partnership was born, with the creation of Da Vinci Design and Da Vinci Science in 2009, partnering high-quality Wiseburn-operated K-8 schools with Da Vinci-operated high schools focused on college and career readiness. The result, 12 years later, is that the Wiseburn community (and students and families from 112 additional zip codes that Da Vinci serves) has an internationally-lauded TK-12+ program unlike anything else in the region.

98% of Da Vinci graduates complete the A-G subject requirements for UC/Cal State admission (the highest in the South Bay and 17% higher than the state average). 97.6% of Da Vinci parents say students are supported in a compassionate and caring learning community, and 88.5% report that they believe Da Vinci involves parents in decision-making.

With a focus on real-world ‘learning by doing’ in a personalized school culture, Da Vinci’s educational model has earned the attention of more than 3,000 visiting educators, policymakers, and change agents from six continents to study our signature practices and school models. Da Vinci has fundraised more than $80 million since inception, strengthening our schools and saving taxpayers millions of dollars. Both Wiseburn and Da Vinci are known for their dedicated faculty and staff and the quality of their small learning communities.

Partnership Roles & Responsibilities
From the beginning, Da Vinci Schools and the Wiseburn Unified School District agreed to a creative district-charter partnership that benefits students, staff, and the community. When the Wiseburn School District achieved unification in 2014, changing from a K-8 to a K-12 unified district, the Wiseburn Board decided to continue partnering with the then five-year-old Da Vinci Schools to deliver its high school program, rather than going through the arduous and costly process of starting its own high school from scratch.

The Da Vinci + Wiseburn partnership cultivated the success of Da Vinci’s high school programs, providing Wiseburn students and others with a college and career-ready model that aligns project-based, real-world learning with workforce needs at the center of a collaborative learning environment where each student’s unique abilities are known and valued.

Brian Meath, currently the Da Vinci Schools Board Treasurer, previously served as an elected member of Wiseburn's Board of Trustees from 1997 through 2010, including serving as its President three times. 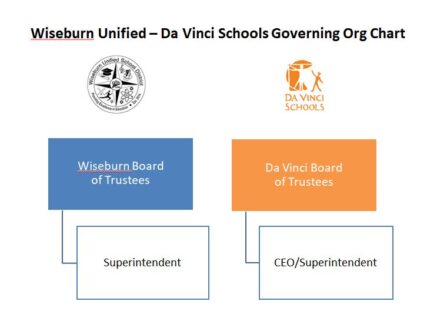 Because Da Vinci and Wiseburn have a unique partnership and shared interest in the success of all of our students, the boards of both Wiseburn USD and Da Vinci Schools schedule joint board meetings throughout the year. These meetings foster greater collaboration for the benefit of the students and families we all serve.

Addressing Questions, Concerns & Complaints
The table below is a quick reference on who to contact with questions or concerns about Da Vinci Schools. We respectfully request that you follow the processes outlined below, starting with the teacher or administrator, in order to work towards a resolution. Our faculty and staff directory is here.

If you still feel that your concern has not been resolved to your satisfaction after following the steps above, please contact the Da Vinci CEO/Superintendent Dr. Matthew Wunder's Office at (310) 725-5800, x1351 or by email at matt@davincischools.org.